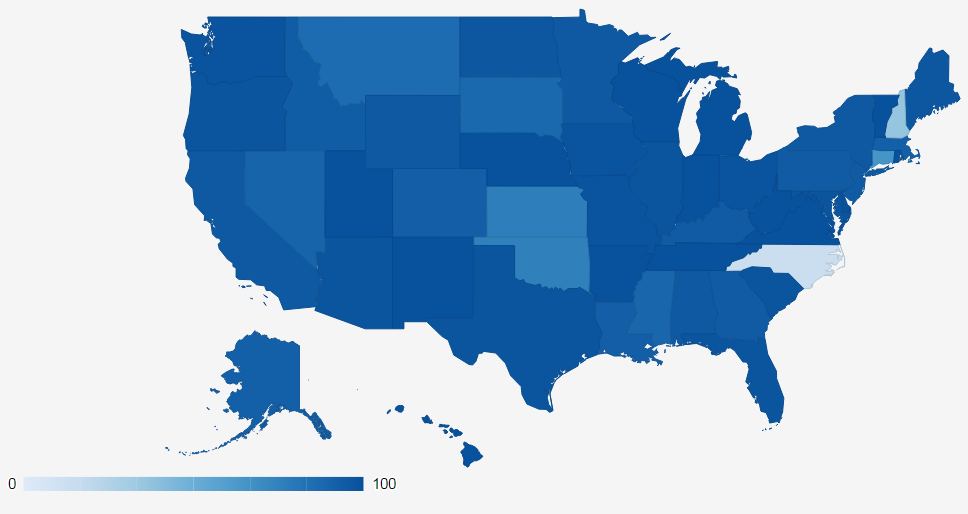 Percent of hospitals in active engagement with a public health agency, by state(attested to meaningful use through the Medicare EHR Incentive Program in 2015)

This variation can be due to several reasons.

(1) This data reflects reports through meaningful use attestation and does not necessarily reflect actual, full capabilities for all hospitals. In 2015, modified stage 2 and stage 2 of the EHR Incentive Program had different requirements for public health data reporting. Hospitals attesting to modified stage 2 were required to report on 2 of the 4 public health data types, and hospitals attesting to stage 2 were required to report on 3 of the 4 data types. In 2015, 90 percent of hospitals (that participated) attested to stage 2, so the 10 percent of hospitals that attested to modified stage 2 reported only 2 of the data types, lowering overall rates in some states.

(2) Hospitals can claim an exclusion from reporting on a data type. For example, if the hospital does not immunize patients or does not have an emergency room, or if the hospital's state public health agency cannot receive the data. To see a full list and further information on these exclusions, see Health IT Quick Stat, Hospital Selection of Public Health Measures in Medicare EHR Incentive Program, or the official CMS exclusion document.

The map and table include hospital attestation data from the 2015 program year of the Medicare EHR Incentive Program. 4,043 hospitals attested to the Medicare Program in 2015; 3,571 attested to stage 2 and 472 attested to modified stage 2. These visualizations do not include data reported to state Medicaid EHR Incentive Programs or data reported in prior program years. The data, therefore, do not include data reported by hospitals who attested in 2014 or prior and did not attest in 2015. For visualizations and analysis of 2014 public health reporting, see Health IT Quick Stat, Hospital Selection of Meaningful Use Public Health Measures, and ONC Data Brief, Hospital Reporting on Meaningful Use Public Health Measures in 2014.