The below visualization requires Flash. Your mobile device or desktop computer may not have Flash installed. Please view this quick stat on a Flash-enabled computer.

This visualization may require more screen width to render optimally. Flip your mobile device to landscape to get an enhanced view of the visual below, or touch to scroll the image. To get the best view, try out this page on a tablet or desktop computer. Use the share icon in the menu to check out this page later. 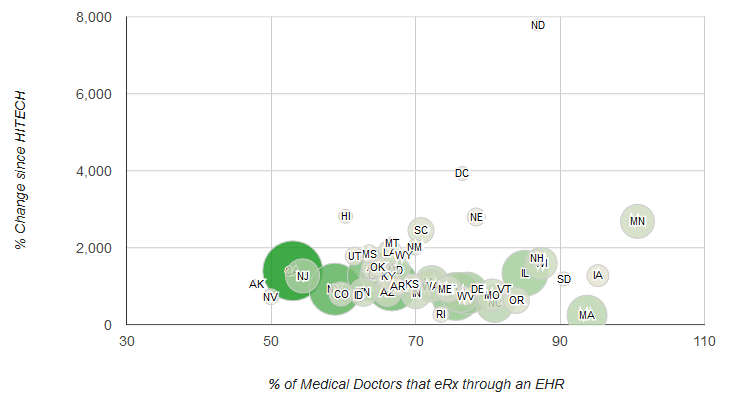 In December 2008, less than two months before the passage of the Health Information Technology for Economic and Clinical Health (HITECH) Act, fewer than 7% of all U.S. medical doctors electronically prescribed (e-prescribe) patient medications through an electronic health record (EHR). As of April 2014, more than five years after the Act's passage, nearly 7 in 10 U.S. medical doctors e-prescribe through an EHR.

This quick-stat visualizes e-prescribing data from Surescripts, an e-prescribing network. Surescripts is an e-prescription network used by the majority of all community pharmacies in the U.S. routing prescriptions, excluding closed systems such as Kaiser Permanente. All 50 states and the District of Columbia were included in the analysis. Numerators calculated from Surescripts data. Denominators calculated using the SK&A Office Based Providers Database using a combination of the title and speciality variables. The counts were de-duplicated to correct for individual providers who are observed at multiple sites.

Surescripts data is available for download here through the Health IT Dashboard open government data sets.

Office of the National Coordinator for Health Information Technology. 'Percent of Medical Doctors e-Prescribing through an EHR on the Surescripts Network,' Health IT Quick-Stat #1. dashboard.healthit.gov/quickstats/pages/FIG-SS-Physicians-ERX-via-EHR-on-Surescripts.php. April 2014.